Last week Adrienne, a responsible Newfoundland Dog breeder,  nearly lost her Newf  Keiva to Pyometra, a life threatening infection of the uterus. Pyometra is a  condition that all pet owners who have intact (unspayed) female dogs need to be aware of.   Pyometra occurs as a result of bacteria entering the uterus.  Open pyometra is easier to identify and treat -- the cervix is open and pus is able to leave the body.  Closed pyometra occurs when the cervix is closed and pus can not leave the uterus, causing it to rupture.  Closed pyomtera is more difficult to identify and treat and will result in death more quickly than open pyometra.  Whether open or closed, pyometra is a life threatening condition. 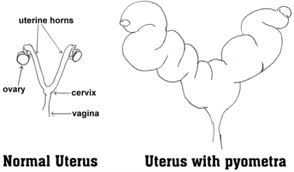 Adrienne has asked that we share her story as a reminder to all pet owners to spay your dog once she reaches maturity. Please don't take the risk of your girl developing this deadly condition!   Pictured below is a normal, healthy uterus -- spaying a dog with a healthy uterus is a far simpler surgery than removing an infected uterus.  Don't wait for an emergency, spay your dog when she is healthy!


Last week Adrienne noticed that  Keiva was not herself -- she was off food, drinking excessively and lagging behind on her walks.  Unsure of what was wrong  Adrienne took Keiva to the vet for blood work and to have a urinalysis done.  The blood work came back normal but her urine showed some bacteria so the vet started her on antibiotics figuring she had a bladder infection.  Adrienne says,  "The next day I noticed some blood tinge on her 'pants' - very hard to tell where it's coming from and it is not unusual to have some blood in the urine with an infection. Since she just started the antibiotics, I thought lets give it a minute to see what happens. By the next day the discharge was so bad (pus blood and FOUL smelling) I knew we were not dealing with a UTI but Pyometra - We went directly to the vets where they did an emergency hysterectomy."

Keiva had open pyometra and in less than a week her uterus had become so large it had curved back on itself to fit in her abdominal cavity.   Keiva was very close to having her uterus rupture. This is a photo of Keiva's uterus taken following her emergency surgery: 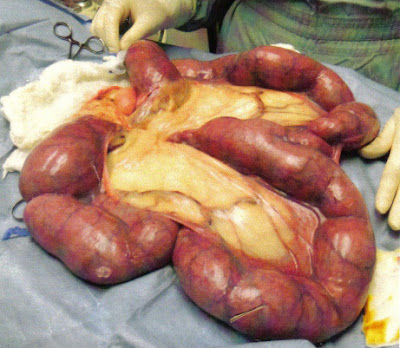 Fortunately Keiva survived the surgery and is now recovering at home, but many dogs are not as lucky.  Particularly in the case of closed pyometra (which is more common) the symptoms may be vague and pet owners may not realize how sick their dog is until her uterus has ruptured and it is too late to save her.

In addition to all of the other benefits of spaying your dog, spaying will eliminate the risk of pyometra.

Still not convinced that you should spay your dog? There is also the cost of treating pyometra to consider.  Spaying a healthy adult dog will cost anywhere from $200-600 depending on breed/veterinarian.  Having an emergency hysterectomy done will cost $1000-3000 and is a far riskier surgery.  It just makes sense to spay your dog while she is healthy, rather than waiting for an emergency.


Some of you may recall that we first wrote about Pyometra back in January 2011 when Ruby the Newf arrived at our rescue and was rushed to our vet for emergency surgery due to pyometra.  Here's the newspaper article we ran shortly afterwards outlining the reasons why it is so important for pet owners to spay their dogs. (Click the image to see it in larger size.) 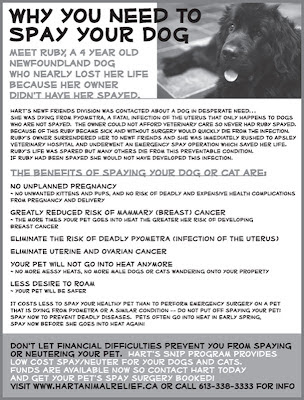