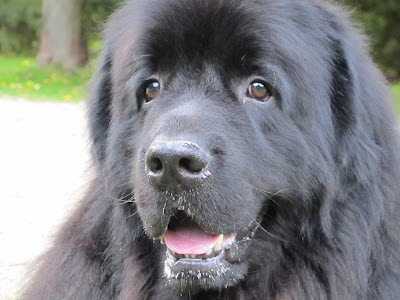 This 5 year old sweetheart entered our program on September 20, 2012 because of a family breakup. Since entering foster care he's been a gentle guy, nice with everyone he meets. Check out the videos below to see how happy he is!!


And Schultz LOVES belly rubs too!!! What a ham he is, so full of personality!


He is a purebred Newf, neutered and as sweet as they come. He adores people and will lap up as much attention as you're willing to give. He is in foster care with lots of other dogs and cats and he's a perfect gentlemen at all times with everyone. He is absolutely fantastic with children and would adore being adopted by a family with well mannered children. He thinks the kids at his foster home are the best thing since sliced bread! Check him out playing with them in the video below.

As you can see in the picture below, Schultz's coat was in need of some serious grooming when he first arrived. He's been all brushed out, bathed and is looking quite spiffy now. His back end had to be clipped right down due to extreme matting but it will grow back in. The main thing is, he's looking, smelling and feeling wonderful.... a pleasure to cuddle! 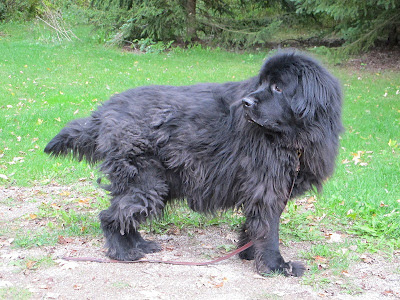 A few years ago Schultz had an accident at the groomers and came home limping. His owner took him to the vet where a torn ACL was diagnosed. The vet did not recommend surgery at that time. Schultz gets around pretty good but cannot handle stairs at all. We took him to see Dr. Janice for assessment. Besides being a wonderfully happy boy, she said that both of his knees are stable but his hips are weak. His back is also sore but she feels it is due to Schultz compensating for his weak hips by attempting to carry his weight with his front legs. He weighs in at 150 lbs and needs to lose 20 lbs to be more comfortable and ease the stress on his hips and back. He has been put on Derramax for pain relief until he loses some weight and also a daily dose of Glucosamine and sockeye salmon oil to strengthen his ligaments. He has a skin infection on his chest that medicated baths will take care of and also bacteria in his ears. This guy seems like a medical mess but give him some time, good food, low impact exercise and some TLC and he'll be ship shape in no time. He will never be able to run, leap or do stairs but he has a lot to offer the right family. His birthday is June 8, 2007 so he has many years of happiness to share!

As you can see in the video below, Schultz doesn't let his hips slow him down very much. He enjoys going for walks and toodling around in the yard; he just can't go for super long walks or do stairs. You may think when you watch him booting around that we've somehow fast forwarded the beginning. We haven't. When he wants to move...., he moves and his legs move really fast. Funny eh?!?! Sometimes when he's overdone it, he needs a bum boost to get him on his feet. "No big deal," he says, "if you don't boost me I'll drag myself over to you so you can help me." What a guy!

To be considered for adopting Schultz please complete an adoption application from the Contact page of this website. His adoption fee is $500 and he is being fostered in the Brantford area. His new family is required to pick him up in person.