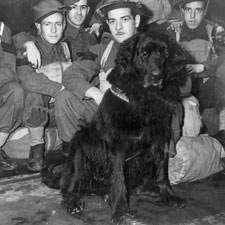 Gander was a Newfoundland dog posthumously awarded the Dickin Medal, the "animals' VC", in 2000 for his deeds in World War II,[1] the first such award in over 50 years.[2] 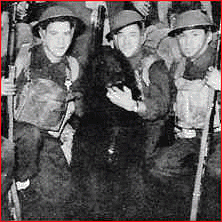 Gander, initially a family pet named Pal, accidentally scratched a child's face with his paw. Worried that he would be forced to have Pal put down, the original owner gave the large dog to the Royal Rifles, a regiment of the Canadian Army stationed at Gander International Airport, Newfoundland and Labrador. The soldiers quickly renamed him Gander and "promoted" him to sergeant. When the unit was shipped to Hong Kong in the fall of 1941, Gander went along.
The Battle of Hong Kong began on December 8, 1941, the day after the attack on Pearl Harbor. Gander helped fight the Japanese invaders on three occasions. The last time, Gander picked up a thrown Japanese hand grenade and rushed with it toward the enemy, dying in the ensuing explosion, but saving the lives of several wounded Canadian soldiers.[3] 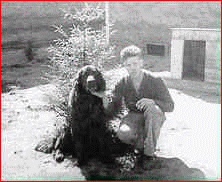 At the insistence of survivors of the battle, his name was listed with those of 1975 men and two women on the Hong Kong Veterans Memorial Wall in Ottawa, Canada.[3]