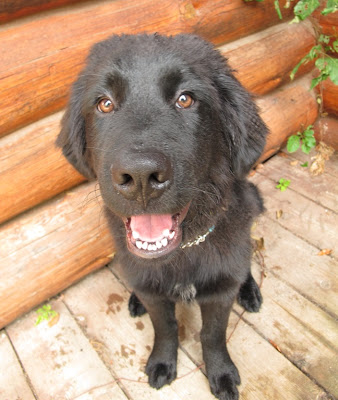 This adorable 5 month old pup is Chewy! Gorgeous, sweet and good natured this guy is looking for a super family to welcome him into their home and hearts.
﻿
﻿ 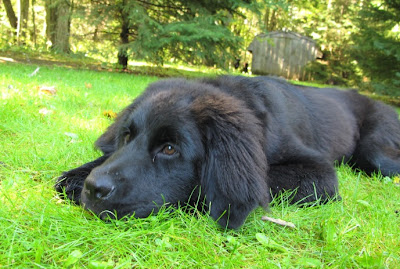 He entered our program on September 21, 2011 with many tears from his owner because their life circumstances changed and they could no longer keep him. They have done a terrific job to this point with training and socializing him which has resulted in Chewy being a darling boy, well on his way to being a well mannered adult Newf. 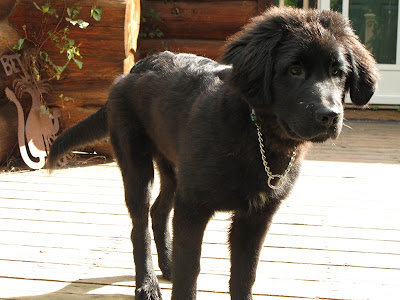 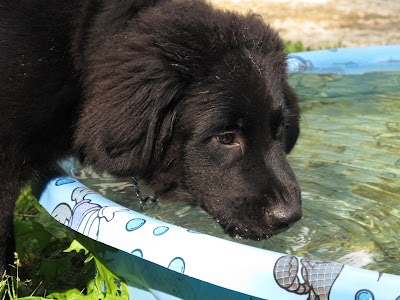 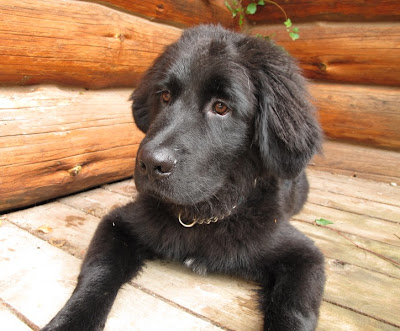 After one day in foster care, we can say that Chewy is a lovely puppy. He's fun, playful, affectionate and absolutely adorable. He knows many commands already and walks very nicely on a leash. Smart as a whip, he soaks up everything he's taught and is very eager to learn. In his video you can see how quick he is to respond and he was working for ... blueberries! He loves them!

He gets along very well with other dogs and loves to romp, play and wrestle. He also likes cats and is fine with them (though if they are playing and running, he will try and join in!). He's great about being handled, if a little squirmy while being brushed. He has no issues sharing anything he's eating or playing with. He rides great in the car and likes to go on outings, especially to the dog park. Fully crate trained, he sleeps in his crate at night without any fuss and wakes in the morning ready to enjoy all life has to offer.

Chewy is a typical busy puppy and if unsupervised he will get into mischief, such as bathroom garbage cans, toilet paper, cardboard, newspapers, shoes ... you get our drift. He is looking for a family that will continue his obedience training and socialization. He will require lots of daily exercise and stimulation to keep him busy and out of trouble. Puppies are a lot of work, especially a giant breed, and his new family should be prepared for this.
﻿

What does he do bad? He has discovered he can just about reach the countertop and likes to check out the edges for tasty morsels. He also tends to bark when he's bored or feels the other dogs should be playing with him. Not huge issues at all and given his young age, they should be easily corrected with some training.
He is ready to join a new family now and applications are being accepted to be considered for adopting him. We are looking for a family that has another young, larger dog for him to play with and the time (and energy!) to keep up with a busy puppy. An adoption donation of $500 applies. Born on April 28, 2011, he is too young to be neutered so will be adopted with a strictly enforced non-breeding/neuter contract. At 5 months, he weighs 45 lbs.
He is being fostered in the Guelph Ontario area and his adoptive family will be required to pick him up in person.

Chewy was a huge hit on the Newf Friends booth at Pooch Palooza September 24 and 25th in Caledon. Thank you to all that came to see him and generously donated to his vest. 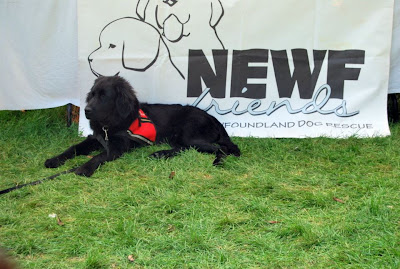