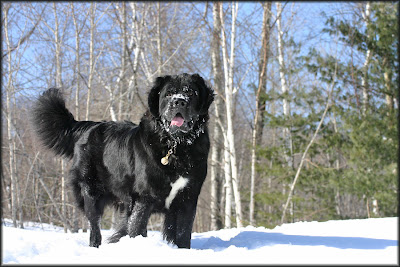 Winter is nearly here and, as you know our Newfs are first cousins to the
Polar Bear. However there are still some things you can do to ensure that
it is a safe and happy time for your Newfoundland.

ANTIFREEZE - This is the biggest danger to our Newfs (and other pets and
small children). The slightest amount ingested will cause the kidneys to
fail and an agonizing death will result in two to three days. Most commonly
Newfs get this from spilled windshield washer fluid which tends to be used
in abundance in winter time. Should you discover antifreeze ingestion in
the first two hours, you should rush your Newf to the vet as there is a
chance with IV fluids to save his/her life. After the first couple of hours
there is nothing that can be done to save them.

SWIMMING/ICE - Newfs are unique among dogs in that they are the only breed
that can swim throughout the winter. However in broken ice conditions they
could get stranded so it is a wise precaution to avoid such situations.

NAILS - The rear nails should not be trimmed in the winter months so that
the Newf will have traction and avoid rear leg injuries such a torn crucia
ligament. If you have a groomer do the nails, make sure they know your
wishes.

BOTTOM OF FEET - In some wet snow conditions your Newf may collect ice balls
between the toes. You can minimize this problem by trimming the hair on the
underside of the foot with a straight barber's shears. The hair should be
cut flush; don't clip between the toes as this fur is needed for warmth.

EARS - The fur on the outside of the ears should be left long and only
trimmed on the edges for neatness of appearance. Clipping the hair too
short on the outer ear could result in frostbite.

SIDEWALK GRIT - If your Newf starts licking off the grit on his feet picked
up from sidewalks and roadways, usually a sand mixed with salt or other
chemicals, then you should clean his feet to prevent ingestion.

If anyone else has any winter tips, please feel free to share them. 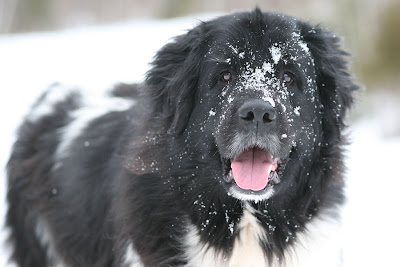